It is a 29-year-old male patient. He was hospitalized for severe traumatic brain injury and subjected to orotracheal intubation for mechanical respiratory assistance. After 8 days, a tracheostomy was performed and continued on ARM for a total of 21 days. He remained with a nasogastric tube for three weeks.
After extubation, symptoms of tracheal aspiration (cough and expectoration after ingestion) appeared and tracheoesophageal fistula was suspected.
Fiberoptic bronchoscopy (FBC) was not conclusive to determine the existence of the fistula. A rigid bronchoscopy was performed in which parallel and asymmetric longitudinal folds and grooves were observed in the posterior tracheal wall, three centimeters distal to the ostoma of the recent tracheostomy. (Image 1). 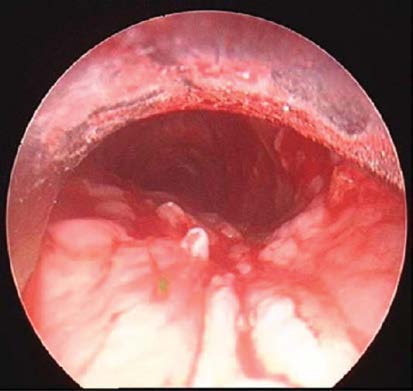 The intense edema with rounded areas hides the plane of the mucous surface and does not allow to notice the existence of a communication and much less a formed fistula. 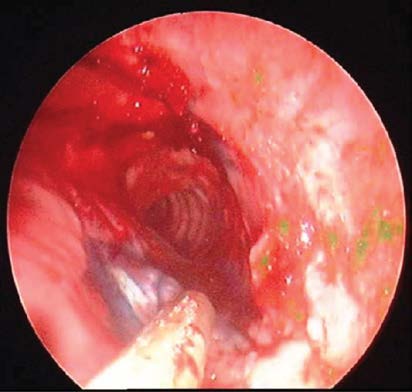 A dilute solution of methylene blue was instilled into the esophagus. (Image 2) To the left of the aspiration probe and in the center of the photograph there is a pale area on the posterior wall, furrowed by a thin linear and anfractuous path stained by methylene blue. Fissure of the posterior wall with demonstrated esophageal communication.

Acquired tracheoesophageal fistula (ATF) is a rare complication that can occur from multiple causes. The most common non-neoplastic aetiology is that related to complications of orotracheal intubation and tracheostomy. In general, they are attributed to tracheal injury caused by the cuff, in addition to underlying clinical conditions. This complication is usually iatrogenic and occurs in less than 1% of patients. The new devices with low pressure cuffs have made this complication uncommon; however it is a serious clinical situation with high morbi-mortality1.
ATF should be suspected in situations of risk. Most patients under mechanical ventilation (MV) have increased secretions, pneumonia and evidence of aspiration of gastric contents. When diagnosed after extubation, the most frequent sign is “cough after liquid intake”; as presented by the patient2.
The diagnosis is made by bronchoscopy and esophagoscopy. Other detection techniques have been described for patients under MV, such as observation of the gastric bag in different phases of the respiratory cycle (the “bag that breathes”) or gas analysis in this same bag, considering the passage from the airway with high concentrations of oxygen3.
The direct bronchoscopic visualization of the site often reveals the defect of the wall. Also the presence of air bubbles of larger or smaller size help to locate the site. This allows the diagnosis of certainty to be made. In the case of our patient, the intense edema of the injury in the posterior wall of the trachea prevented confirming or ruling out this suspicion. An old and classic “Methylene Blue” test was useful in locating the fistula. Shah et al. described the usefulness of its use in relation to a case in a patient with a tracheal stent4. Benatta et al. they also reported its use in a case of persistent TE fistula after surgical correction of an esophageal atresia in a two-month-old child5. However, the use of methylene blue should be prudent, since it can be replaced by less toxic substances such as cake dye used in confectionery (cake blue). Methylene blue is a potent inhibitor of monoamine oxidase and its intravenous use could trigger serotonin syndrome in patients who use certain types of antidepressants6.
In general, the surgical treatment is deferred prior to defunctionalization of the area, once critical conditions of MV, bronchoaspiration and nutritional status of each case have been overcome. The correct diagnosis is crucial in the evolution of these patients.

The author declares that he has no conflicts of interest.

Go to the article published by RAMR