The paper describes two new endoscopic signs which can be useful in the use of diagnostic bronchoscopy. This is an essay on particular anatomic and functional circumstances suggesting the presence of a pathology which cannot be seen by the bronchoscopist. These two signs are the Bubble Sign and the Black Hole Sign. The Bubble Sign is observed when the airflow is absent in a subsegmental bronchus leading to a peripheral pulmonary mass. This can be shown by the lack of mobile bubbles when a subsegmental bronchus is flooded with saline solution. The Black Hole Sign consists in the circular penumbra observed at the end of a bronchus which communicates with a cavity.
The paper describes the presentation and interpretation of these signs and offers an explanation about their physiopathology.

Airflow is absent in a subsegmental bronchus leading to a peripheral pulmonary mass. This can be evidentiated by the lack of mobile bubbles when it is flooded by saline solution. 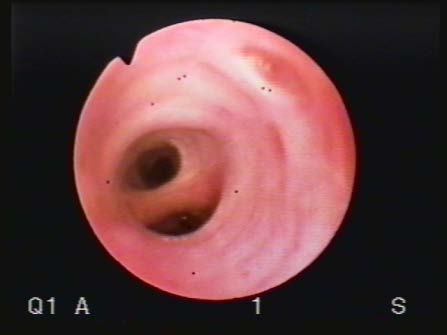 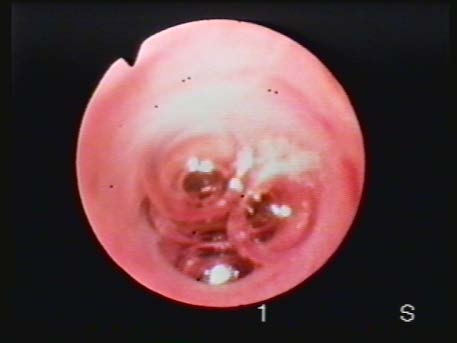 Bronchoscopic examination of patients presenting with peripheral lung opacities is a common situation, and frequently endoluminal signs are lackin. When there is high suspicion of neoplastic disease, radioscopic guidance can increase its diagnostic yield.

The bubble sign describes a phenomenon that when is present, allow bronchoscopists to identify the bronchus tributary of a peripheral mass. Its physiology is simple, in a pulmonary nodule, normal structures are replaced by neoplastic tissue so ventilation is partially or completely impaired. The same situation can be expected in the bronchus tributary to the lesion. Conventional fiber bronchoscopes with diameters around 6 mm, allow observation of subsegmental bronchi. If the pathologic area producing endoluminal obstruction or extrinsic compression is located distally, it cannot be reached by direct vision. In such cases, a simply procedure, for example, instillation of 10 ml of saline solution in lobar or segmental bronchi, can evidence impaired air circulation in the affected distal bronchus. The liquid interacts rapidly with air producing a chain of little bubbles that move in and out normal bronchi following pressure changes due to respiratory activity, but this phenomenon is absent in the one tributary to the pathologic area. This is the bubble sign. 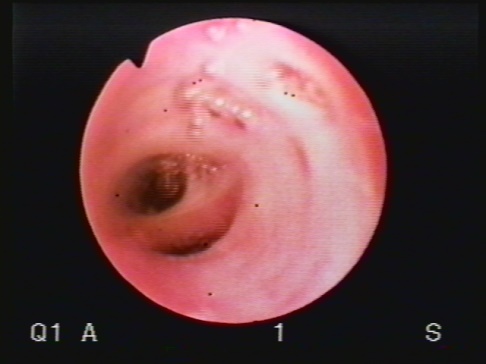 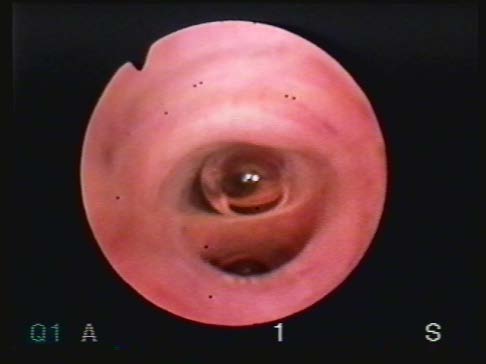 In bronchi with posterior directions when the patient is in supine position, as the apical of the inferior lobe, the little volume of saline solution and secretions that remain after aspiration accumulate flooding them again. This does not happen in remaining normal segmentari bronchi.

The bubble sign can be found in a common clinical situation characterized by lack of direct endoscopic signs, challenging the bronchoscopists to discover more subtle signs. The instillation of saline solution is a simple procedure that evidences it, consumes little time and has no complications. Even if the examination is taken under radioscopic control, observation of this sign can make easier the choice of the right bronchus before introducing the biopsy forceps. Then, as a prize for the operator, it will come the chance to “feel in his fingertips” the stop of the biopsy forceps once it has reached the right bronchus.

It consists in the circular penumbra observed at the end of a bronchus that communicates with a cavity. 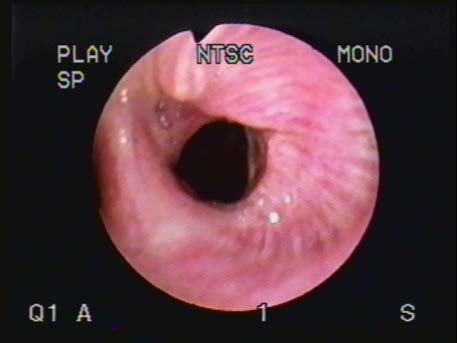 The endoscopic exploration of the bronchial tree allows the operator to travel within major airways, with an almost circular light, variable lengths, and progressively lesser diameters. Within this trajectory, bronchial mucosa can be seen uniformly pink.

The black hole sign is originated when the explored bronchus communicates with a cavity or a secular dilatation. So, it can be found in segmental and subsegmental bronchi, also in lobar bronchi as in case of bronchopleural fistula.

To understand its formation, we must consider the bronchus as a cone (fig. a), with its sectional area reducing progressively distally. The fiber bronchoscope light propagates in a parallel and divergent way enlightening bronchial walls (fig. b). The light beams will reflect and refract according to their incidence angles (fig. c). When the bronchus is widened beyond a point or when it communicates with a cavity, its conic structure disappears. The intensity of the light source becomes insufficient to reach the cavity walls and reflected beams will be distorted.

The final result is the low illumination of the widened bronchial walls or the cavity. The bronchoscopists will see at the end of his visual field the bronchial branching as dark circles in one or more bronchi due to the distal penumbra. 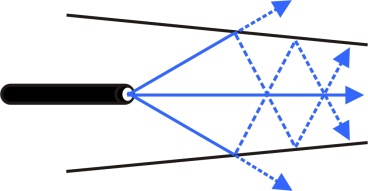 Go to the article published by the RAMR