The occlusion of a postpneumonectomy bronchopleural fistula with a diabolo shaped silicone device inserted through a rigid bronchoscope is reported.

Even uncommon, bronchopleural fistula represents a major complication of lung resection surgery, especially for those patients who are not in optimal clinical conditions or undergo an emergency procedure.

Its frequency is about 2-5% and produces high mortality.

This situation is a challenge for the bronchoscopist who is tempted to apply an endoluminal method in order to avoid a new surgical procedure.

Symptoms such as dyspnea and productive cough (frequently mucopurulent) can raise the suspicion of this complication.

Its presentation is as an acute form in the immediate postoperative period with subcutaneous emphysema or tension pneumothorax, or as a persistent air leak through the pleural drainage system.

Air bubbles originating from the affected bronchus can be seen in peripheral fistulas although this finding is not specific and can also be present in normal bronchi. In such cases, in order to identify the segmental bronchus that communicates with the fistula, a catheter with an inflatable balloon can be inserted through the flexible bronchoscope. If the pathologic bronchus is reached, air leak through the pleural tube immediately ceases.

The instillation of dyes such as methylene blue in the bronchial tree and its subsequent appearance in the pleural tube confirms the diagnosis, but selective bronchography allows an accurate knowledge of its shape and direction in order to plan a better therapeutic approach.

We present a case of post pneumonectomy bronchopleural fistula diagnosed by endoscopy and bronchography and its occlusion with a silicone device delivered through a rigid bronchoscope.

A 47 year old man was admitted because of moderate hemoptysis. He had pulmonary tuberculosis (TB) eleven years ago and completed treatment with clinical and bacteriologic resolution. He remained asymptomatic until his admission. Chest radiograph showed a cavitary lesion in the left superior lung field. Bronchoalveolar lavage cultures yielded aspergillus fumigatus and the diagnosis of pulmonary aspergillosis was confirmed by specific serologic testing.

A left superior lobectomy was planned, but it had to be extended to left pneumonectomy because of accidental laceration of the left pulmonary artery.

Bronchopleural fistula was suspected after nine days due to productive cough and persistent air leak through the thoracostomy tube.

Flexible bronchoscopic examination showed a 4 mm orifice in the outer side of the suture line in the bronchial stump (figure 1). 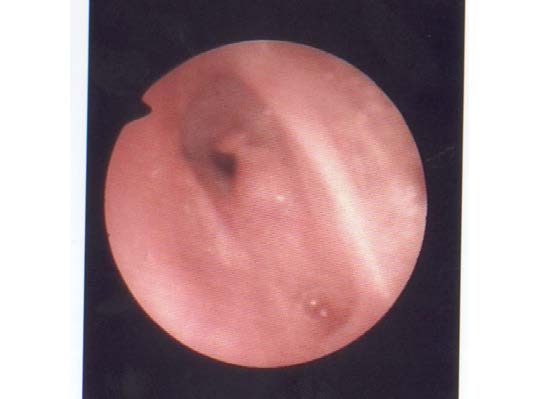 A catheter that reached intrathoracic trachea was inserted through the nose. Iodinated contrast was delivered with the patient positioned in left lateral decubitus. It filled left main bronchus and reached pleural space through the fistula drawing a lineal tract (figure 2). 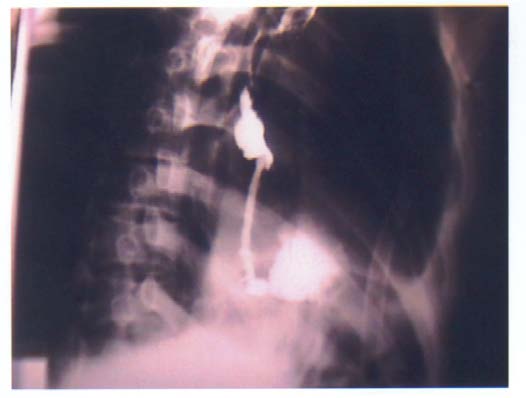 Three days later a bronchoscopic procedure was performed considering the patient’s poor clinical condition. Conscious sedation was induced with fentanyl and midazolam. The patient remained with spontaneous breathing and hemodynamically stable. Intubation with rigid bronchoscope was then carried out. A diabolo shaped silicone device, with the same consistence and elasticity as bronchial stents was used to occlude the fistula (figure 3). 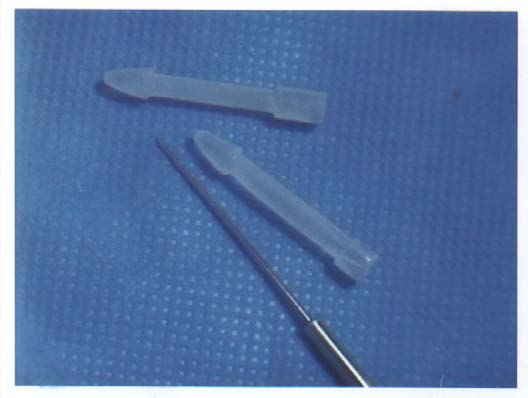 The device was inserted with a specially designed forceps with a retractile needle in its distal end, that served to hold it through the rigid bronchoscope channel.

Once the proximal orifice was identified, the diabolo was introduced through the bronchoscope and stuck in the fistula. Then the forceps was activated and the device was released within the fistula (figure 4). 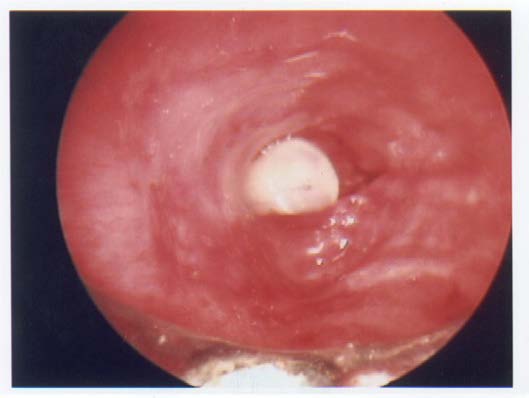 After that, the thoracostomy tube was withdrawn and an endoscopic exploration of the pleural cavity was performed. The distal ending of the diabolo was identified surrounded by bloody bubbles (figure 5). 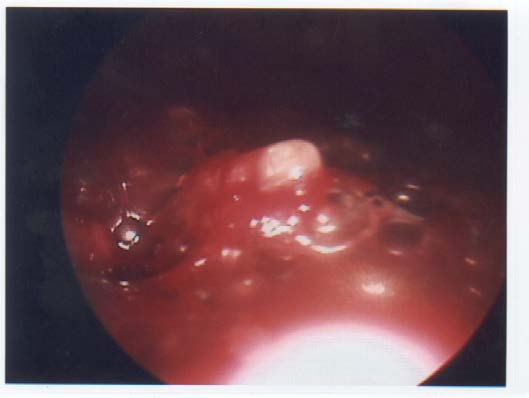 A thoracostomy tube was inserted again in the pleural cavity, fixed and covered with gauzes to absorb blood and fluids.

Cough remained unchanged for the first few days, but air leak markedly reduced until it disappeared.

Four weeks later a flexible bronchoscopy was carried out. The silicone device could not be identified, but the fistulous orifice was significantly smaller.

A new endoscopy performed after three weeks showed granulation tissue that filled completely the bottom of the bronchial stump and no evidence of the orifice (figure 6). 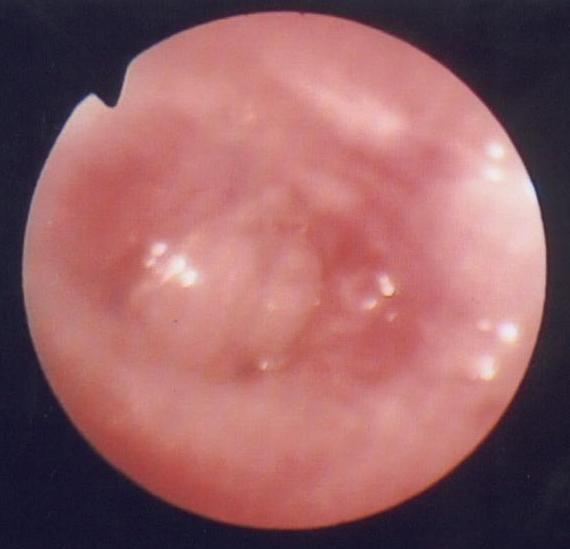 Even though the frequency of bronchopleural fistula is low, its mortality is considerable and it can be as high as 50% (9). Surgical treatment is complex and sometimes is contraindicated.

Early fistulas present in the first week after surgery and are associated with technical failure of the procedure. It includes excessive bronchial dissection with compromise of the vascularization and tissue devitalization, tension suture, and long bronchial stumps (10). Also traumatic factors are involved such as carinal traction, or glottis closure during cough with the development of high pressures in the airways that can impair the local healing process and originate the fistula.

Fistulas may occur in an intermediate postoperative period, during the second to the fourth week. In these cases another factors can be involved such as malnutrition, local infection, older age, steroids, diabetes, previous radiotherapy, local recurrence or incomplete resection of lung cancer.

Early fistulas, especially those with voluminous air leak require rapid re-exploration to evaluate the bronchial stump. Direct closure is often possible by completing the pneumonectomy or by muscular tissue transposition.

Thoracocentesis avoids tension pneumothorax and allows volume reduction of the pleural cavity. But this measure is palliative until the patient undergoes surgery. Unfortunately many of them may not bear it.

p>Many techniques have been performed by bronchoscopists with the intention to close bronchial fistulas. Most cases reported the use of sealers that combine fibrinogen and thrombin, specially for peripheral fistulas. Occlusion of these kind of fistulas with a solid device were also communicated (2, 11,12).

In this case, a silicone device was used. Its consistency was enough to penetrate the fistula transmitting the pressure applied by the forceps, and flexible enough to bend and adapt the curves of the fistulous path.

The diabolo shape consists of both endings wider than its central portion, designed to remain stable inside the fistula resisting the impulse of cough. Coughing tends to narrow bronchial lumen and hold the device instead of expelling it. Considering this fact, it is more probably its passage to the pleural cavity during the profound inspiration that dilates bronchi and precedes cough.

The value of bronchography to confirm the diagnosis and delineate the fistula trajectory is undeniable. A non-straight fistula would be excluded from this treatment because forcing the pass of the device through a curve sector of its trajectory can result in a lesion of the bronchial wall or the pulmonary artery.

Bronchography gives information about the length and the diameter of the fistula, which are necessary to prepare the best device to fit in it.

In an endoscopic examination of the bronchial stump four weeks after surgery, the orifice was minimal, with intense edema of the bronchial mucosa. The device could not be identified and because there was not a history of its expulsion with cough, it was assumed that it had passed to pleural cavity. Three weeks later a granulomatous tissue had replaced the edema and there was no evidence of the fistula.

The occlusion of a pathologic orifice in an organ does not seem a satisfactory approach unless the case of a patient mechanically ventilated with a great air leak through a communication to the pleural cavity. But this is not the present case so it raises conflicting issues. They derive from the idea that the same treatment is applied for totally opposed pathologies. The silicone device is comparable to a bronchial stent except that the former is not hollow. It is designed to achieve the closure of the bronchi and the latter to keep the airway patent after its removal.

Tracheal or bronchial stenosis endoscopically treated presents a variable frequency of recurrence. Re-stenosis appears generally in the first four weeks. The mechanisms that led to fistula occlusion in this case may not be different from those that lead to re-stenosis. It is possible that the device acted like a foreign body producing local irritation that derived in mucosal thickening and formation of granulation tissue that closed the fistula. Other factors such local ischemia originated in the pressure exerted by the device could be present. All of these factors may play a part in the development of airway restenosis after stent treatment.

We conclude that a greater knowledge of the mechanisms involved in the airway mucosa response to these “pressure devices” is needed. Probably the causes that originated fistula closure are similar to those present in stenosis recurrences.