This article summarizes the data given in several published clinical studies, in terms of side effects and critical data of the implantation process of Laringo – Tracheobronchial Prosthesis in humans.

Laringo -Tracheobronchial Prosthesis are implantable devices that are indicated to maintain or support the diameter of an airway. They have been used to treat main airway obstructions in benign lesions and to relieve effects of neoplasic obstruction. In the last twenty years a great variety of such devices has been used worldwide. These prosthesis, like the “T” tube, first described by Montgomery in 1965, have given simple solutions to complex problems.

Design of canulas, tracheobronchial stents, and “T” tubes is simple. Mainly constructed in one piece without any rigid structure, they are safe and reliable. Airway reduction or complete obstruction severely compromises the patient, and after performing local treatment, the implantation of these devices has been highly effective to maintain airway permeability. Its use has been generalized. Its flexible silicone structure makes them easy to insert, and its removal is possible without complications.

The following Studies/Articles were reviewed:

From the articles above, the following data has been compiled: 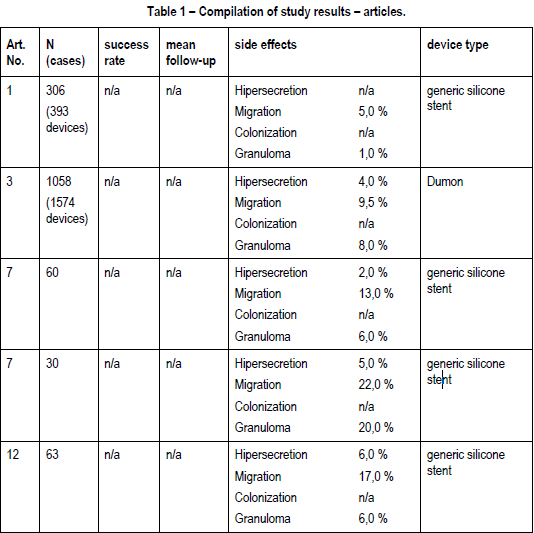 Summary of results from articles

The use and placement of Laringo –Tracheobronchial Prosthesis has given proof of their utility to restore pulmonary ventilation and improve quality of life in non-surgical and post-surgical patients. They are widely used in benign stenosis with variable results. They can be left in place for long periods of time with acceptable compliance. Migration, secretions impact and granuloma are the most frequent complications.

Attached to this report are 4 separate reports made by 9 physicians who use STENING devices.

Attached to this report are 4 separate reports made by 9 physicians who use STENING devices.

The devices usually remain implanted during variable periods. From a few weeks to 24 months or more, depending on the survival of the patient or the control of his condition. Medical publications make little reference to the periods in which the devices remain implanted (14). This varies according to the therapeutic preferences of the working groups.

Although there is no consensus indicating the most appropriate length of stay, the usual in our environment is from a few days to 8 weeks for the laryngeal stent, and from 2 to 20 weeks for the cannulae and T tubes.
Tracheobronchial prostheses remain implanted for a longer time, depending on their initial indication, and can be from 6 to 18 months (D). There are reports of very long stays, which reach 4 and 5 years, with good tolerance and no alteration of the material of the device that motivates its extraction has been observed (1-13-C).

In the reviewed literature, the devices were removed due to cure or remission of the treated conditions. In many cases the device remained implanted throughout the patient’s survival (1-13). The removal of the device for other reasons such as its deterioration, modification, decrease or loss of its mechanical qualities or rejection of its constituents were never reported.

In the case of implants that are introduced through the airway, their condition can be evaluated periodically with an endoscopic examination.

Although there is evidence of long stays of the implanted devices (1-13-D), and there are no references that suggest the loss of their functions in the airway, it is advisable to replace them after 18 months of implantation or when there are signs of colonization. All this will depend on the criteria of the acting physician and must be adjusted to the individual conditions of each case.

There is no relevant statistical difference between the Stening devices side effects rates with respect to other generic devices well established and widely used in the market.